Archaeological discoveries certify that the ccolonization of Soufli dates back to the Hellenistic period. According to a Turkish sightseer, who in 1667 refers to it by the name Sofulu, Soufli was a large village, free from the taxes imposed by the Ottoman Empire. Its boom began in the 19th century and it constituted an important commercial centre. The construction of the railway station in 1872 contributed considerably to its economic growth. Its population increased at an impressive pace, thus in 1877 it numbered 4.680 residents whereas in 1908 its inhabitants were 12.000-13.000. Also known as the “Town of Silk”, apart from sericulture which boasts a long tradition in the region, Soufli is famed for its wine-making and its meat, whereas carriage production and blacksmithing contributed indeed in the economic growth of the town.

After signing the Treaty of Lausanne in 1923, Eastern Thrace and Rumelia came into the domain of the newly-formed Turkish state. After land redistribution, Soufli lost a significant area of about ​​70,000 ha. packed with mulberries, which constitute the food of silkworms. Moreover, with the introduction of the silk trade in the tax framework in Greece, there was a decline in the production and exports to other countries, while the most powerful blow came with the discovery of artificial silk fiber that resulted in interrupting the upward trend of sericulture. At that time four reeling factories operated in Soufli as well as many silk cottage industries, which closed down.

THE ARCHITECTURE OF SOUFLI

The architecture of Soufli is also noteworthy, aiming at fulfilling the needs of sericulture along with habitation. Since the farming of silkworms was mainly performed in the houses, their architecture as well as their functional organisation directly depended on this activity.

The houses of this particular architecture, known as cocoon houses, are mainly two-storey, some are one-storey and few are three-storey. They are built with traditional materials, such as stone, timber and red brick with thick walls (roughly 70 cm.) and narrow wooden frames so as to achieve the maintenance of constant temperature and proper lighting conditions that contribute to rearing the silkworms. The ground floor usually consisted of a single room, which served storage needs, such as the stacking of mulberry leaves or the harvest of cocoons, while a very small part of it was used as a family residence. The upper floors were also single rooms and were entirely occupied by wooden pergolas for the silkworms to be placed.

Monuments of the town of Soufli

Cocoon houses or “mpitziklikia” solely served the needs of sericulture. One of the most representative and distinct cocoon silkworm rearing houses, standing out with its big volume is the hotel “To Koukouli”, built in 1850, that belonged to Kalesis family. It is a three-storey building of 490m2 that functioned as a warehouse for baked cocoons. The cocoons (approximately 20.000 – 30.000) were bought there, after being baked in special ovens, dried in specially constructed spaces and stored. The building is a representative example of the “industrial” architecture of the beginning of the 20th century. In 1994 it was bought by the municipality of Soufli, funded and restored though “Leader” project, and it currently operates as a hotel. 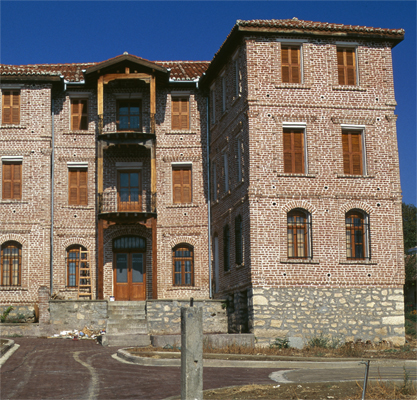 The three-storey Brika mansion demonstrates a special architectural structure with highlighted angles, brick-built indentations, triple lintels, a strongly elevated curved three-storey gallery and a wooden pediment with a slightly arched base. It successfully combines its craft mission with the grandeur of a western noble suburban villa. Apart from being the owner’s residence, it was also used for silk worm rearing, dried cocoons storage and silk seed production.

It was built around 1890, specifically designed for the needs of sericulture and silk seed production by skilled craftsmen from Bursa and it is seated on a raised stone pedestal. The owner was one of the few silk seed producers in Soufli and his family was of the most prosperous in the city. Its special construction ensured appropriate conditions for silkworm rearing and cocoon storage.

It was restored by the Municipality of Soufli and since June 2010 it has been operating as a Historical Museum with references to the history of the town, while hosting the exhibition of the rich Silk collection of Chrysalis Association of Friends of Silk.

Silk cocoon production and especially their processing quickly evolved upon the advent of advanced techniques. In the beginning of the 20th century organized units were built, employing numerous workers. The main industrial complex in the city was the silk factory of Tzivre family, built by the Italian brothers, Ceriano in 1910. The premises of the factory extend in 10.5002m2. It consists of 13 buildings, the most important being the three-storey cocoon warehouse, covering 469m2 and 5.900m3, with wooden pergolas in its full height, extending over 2.915m2. It also includes the dryer (the place where the stifling of cocoons is performed in special ovens), the fabric unit, with 24 textile webs and a weaving unit, as well as the silk-factory reeling unit, covering 500m2 and 94 reeling basins. The complex was bought by the municipality of Soufli, which undertook the restoration of frames and roofs. The buildings are intended to be used for meetings, as a hotel, museum and cultural venue. The place is partially open to visitors. 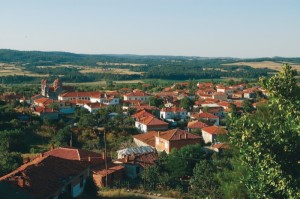 According to tradition, the residents from Ano-Paliochori and Kato-Paliochori joined to create a new village under the name of Dadia. Testimonies report that the area of Dadia had been inhabited since the fall of Byzantium. During the Ottoman Empire, it was called Tsiam–Kebir that meant “village of the big pine” or “Tsiamkii”, which means Pefkochori (Village of Pines). The name Dadia was given much later from dadi (the firebrand), that is the full of resign pine timber, which in the oldest times was used as kindling and as a firestarter. The residents of Dadia, according to folk tradition, settled here when a horrible epidemic disease struck their homeland, a big city that was found in the bank of the Evros river, traces of which persist until today, near the hill where Evros River meets Maggazi tributary.

A village east of the Evros river, Lykofi or Kioupli, is considered to be the homeland of some thousands of Greeks, who after the catastrophe of Asia Minor and population exchange were forced to cross the river. Most settled just across in two villages so as to have eye contact with their fatherly houses. 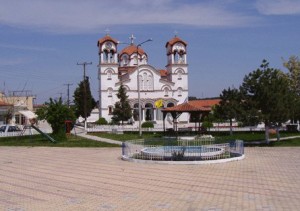 Lagyna is the second village, which took its name from Kioupli (Kioupi = big pitcher [lagyna]), where its residents come from. An aqueduct as well as tombs of the Macedonian period have been discovered near the village on the slopes of low hills, with a view to Evros and Kioupli. What is saved from the old church is the old wood-carved icon-screen and some icons which are exposed at the place set apart for women in the new church of Agia Paraskevi.

Lefkimi, a picturesque village, surrounded by the beauties of nature, is located on the outskirts of the protected Dadia-Lefkimi-Soufli forest. There are two versions concerning its foundation. The first one states that it was founded in the 13th century by the Catalans. The second goes back in the early 17th century and refers to population displacements by the residents of ancient Dymi in the surrounding region. The village took its name from the big number of Willows (Lefkes) that existed in the area. Its privileged position next to the forest and near the Evros River made it one of the largest villages and rendered it a commercial centre of the region until 1927. The remaining buildings with their remarkable architecture, built by the craftsmen of the village, testify the economic prosperity of that time. Today Lefkimi exhibits many well-preserved wells, a beautiful square, the old “giachana” and wonderful churches.

This privileged position is what makes Lefkimi an escape centre and a base for exploring the two National Parks of the area: the Dadia-Lefkimi-Soufli Forest and the Evros Delta, allowing bike and drive excursions in the woods. Just before reaching the village, the fossilized forest of Lefkimi-Fylakto is found, which is directly related to the volcanic activity that occurred in the region 25.000.000 -35.000.000 years ago. There, you can see fossilized trunks of oak, unique in Europe, in their natural environment.

Kornofolia is a very old settlement that retains its name since the period of the Ottoman Empire. The Turks called it Derven Karabounar, which means Mavropigado (Black well), taken from the well that is found until today next to the square. However, the residents (who were all Greeks) have always called it Kornofolia. It took this name from the abundant Hooded crows (kourounes), which were nesting in the big old Elms around the old well.